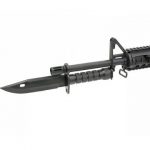 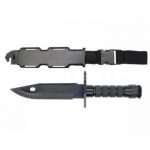 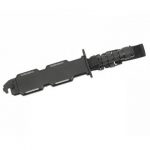 – Rubber and ABS made

– Weight: 180 gr
The M9 Bayonet is a multipurpose tactical knife that was adopted by the United States military in the mid-1980s. It soon found its way into many Army and Marine Corp units as a standard issue knife. The M9 was also designed to be affixed to the front of issued M4 and M16 rifles.

The M9 Dummy Bayonet is made of a rubber and ABS, it is still pretty durable. The “blade” is about 165 mm long and features a serrated back.

As it is a bayonet, the replica M9 features both an opening on the hand guard and a channel on the base of the handle to attached it to barrels of M4 and M16 airsoft guns.

The handle is constructed out ABS plastic and is light textured. This makes it to grip even when the handle or the user’s hands are either dirty or wet.

The sheath is ambidextrous in design as the bayonet can be inserted easily with either the left or right hand with the bladed edge facing either way. It is constructed out of the same light weight ABS plastic and can be mounted to most belts via the buckle and loop stra